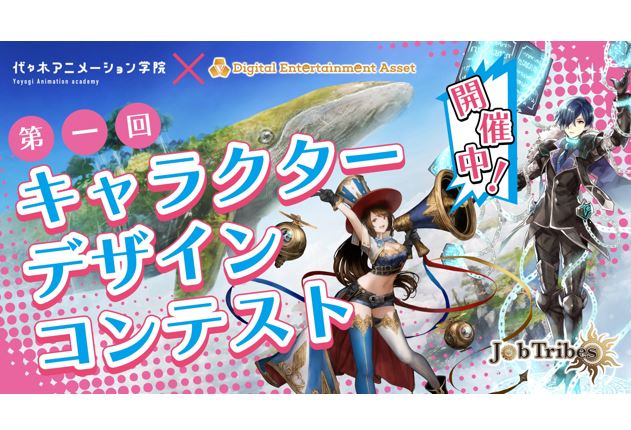 Digital Entertainment Asset Pte. Ltd. (DEA) is hosting a character design contest for Yoyogi Animation Academy (Office: Chiyoda-ku, Tokyo, CEO: Daiki Hashimoto) students, as part of an effort to improve the social status of creators. The winning character designs will be used in DEA’s new blockchain game, “JobTribes,” which is planned to be released in Spring 2020.

“JobTribes” is a game which utilizes blockchain technology to manage and curate the characters in the game as “digital arts.” By enabling a secure transaction of these “digital arts” on a separate platform we are developing called the “digital arts auction,” DEA is creating a brand-new monetization scheme and a life-time guaranteed protection of creative rights scheme for creators.

Yoyogi Animation Academy endorses our vision to protect the rights of creators and to improve their social status, which is why we are able to collaborate on this character design contest. Student participation to a project intended to improve the social status of creators by utilizing blockchain technology is a globally unprecedented example of blockchain technology implementation.

“JobTribes” is a game which features characters designed based on various occupations and careers around the world. The theme of our character design contest is “diverse jobs around the world.” We expect students to come up with fresh and innovative ideas, and the winning designs will be registered as official characters in “JobTribes.”

The storywriter for the game, Shin Kibayashi (the author of megahit manga series such as “The Kindaichi Case File,” “Drops of God” and many more) will be the chief judge of the contest, and winning character designs will be actually used in “JobTribes,” which is planned to be released in Spring 2020.

Please be on the lookout for our collaboration with Yoyogi Animation Academy, an academy which has a rich history of educating young animators in Japan for the past four decades, as well as our unique effort utilizing blockchain technology to uplift the social status of creators around the world.

Blockchain Game, ”JobTribes”
“JobTribes” is our first game to be released on the “DEAP Platform,” an online blockchain platform originally developed by DEA. “JobTribes” is a card battle game that tests a gamer’s intellect and entice a collector’s appetite. A leading IT development company in Japan, Tecotec inc., will be in charge of blockchain technology development, and our creative team will be led by smash hit storywriter Shin Kibayashi, and character designer, Haruhiko Mikimoto.

“JobTribes” is planned to be released in Spring 2020.