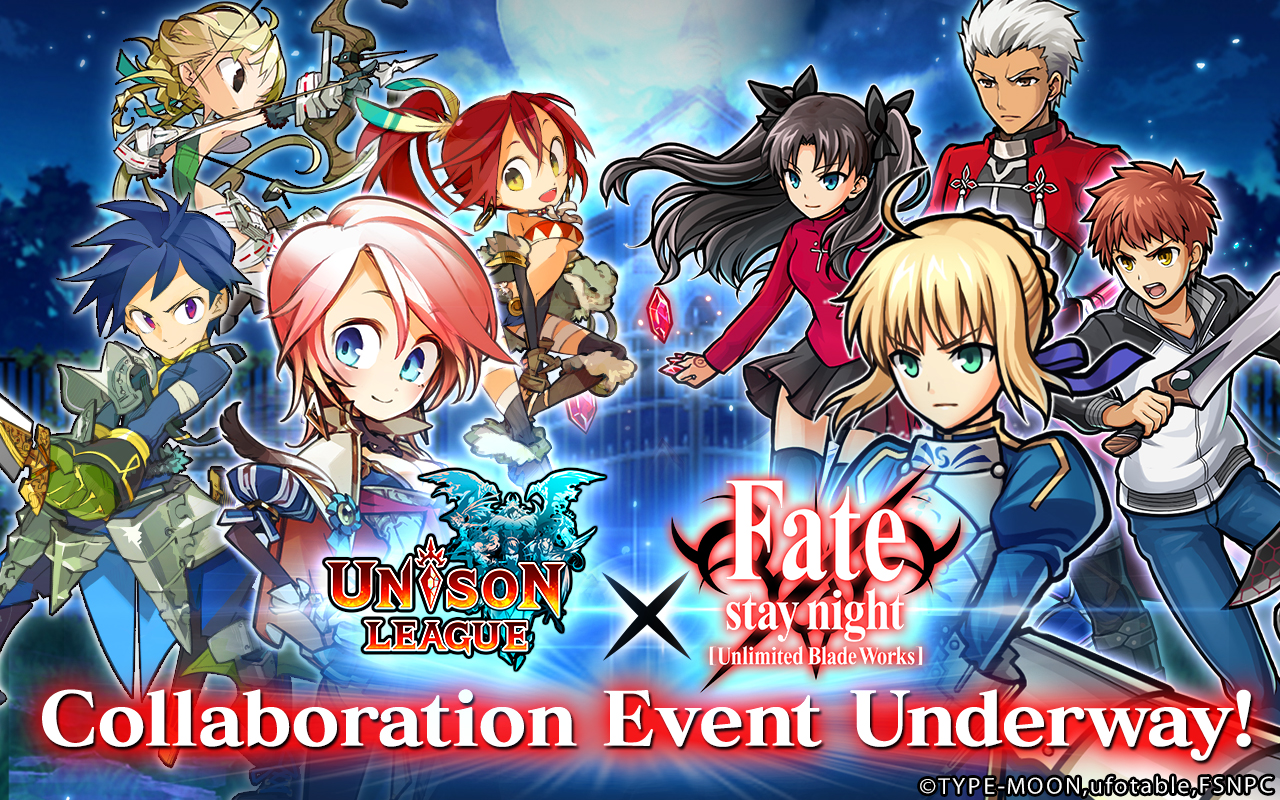 Collaboration Event-Exclusive UR “[Shinai] Saber” Gift for All!

Exclusive Characters & Weapons up for Grabs in Quests!

Unison League has joined forces with the popular Japanese anime TV series Fate/stay night [UBW] to bring players a special collaboration event starting today, May 11, 2017. In this exciting tie-up, “Saber”, “Archer”, “Lancer”, “Caster”, and other characters of the fantastical Fate/stay night [UBW] world appear in Unison League. Players can expect special story Quests created exclusively for this collaboration along with a whole host of other treats.

▼UR “[Shinai] Saber” With Powerful Skill for All Players!

All players that log in during the above schedule will obtain UR [Shinai] Saber. [Shinai] Saber possesses a powerful skill that deals physical damage to all enemies and heals all allies, so make sure you collect yours!

*Only one [Shinai] Saber can be claimed per player from this login bonus. Collaboration-exclusive “Fortuitous Servants” Quests have begun. Navigate your way through these Quests for a chance to obtain cosmetic hair and face Gear of Fate/stay night [UBW] characters. Equip them and become your favorite Fate/stay night [UBW] Servant! The completely original 13-chapter story, filled with fun and excitement, will have you storming through the Quests in anticipation of what happens next! Team Battles have been added exclusively for this collaboration event. In Team Battles, players choose to join forces with either Saber, Archer, or Lancer and compete on points to lead their team to victory. The team that reigns supreme will bag themselves great rewards! Also, Command Seals (Reiju) can be activated by the player hosting a Quest to unleash a powerful effect. When Command Seals are used, an impressive animation plays out, but be careful how you use them, as they can only be used a maximum of 3 times per Quest.

▼Battle Your Way Through Quests to Obtain UR “Gilgamesh” and Collaboration-Exclusive Cosmetics!

Score a top rank in the event to obtain exclusive UR character “Gilgamesh”. There is also a chance to obtain collaboration-exclusive cosmetic Gear and Box Spawn Tickets in the event. “Homuhara Uniform” and “Kirei Kotomine’s Clothes” Gear pieces have a chance to appear in Box Spawns, so take on the relevant Quests and aim for these cool cosmetic additions! Collaboration Spawns that feature popular characters “Saber” and “Lancer” are now available. A Collaboration Spawn that can be performed FREE once a day and a one-time-only Spawn that guarantees one UR collaboration Gear piece are now open. Tons of Weapons and DEF Gear from Fate/stay night [UBW] are featured in these Spawns, so don’t miss this opportunity to dress up as your favorite character! ■About Fate/stay night [Unlimited Blade Works]
Fuyuki City—a city surrounded by the ocean and the mountains becomes the setting for an age-old ritual. To realize the mythical Holy Grail, which is said to grant any wish from its possessor, seven masters are given seven heroic spirits chosen by the Grail. These heroic spirits or servants are:

This is the “Holy Grail War.”