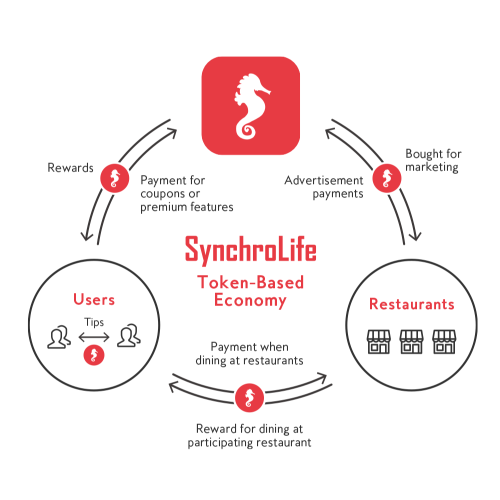 SynchroLife Limited, the Hong Kong based managing company of the artificial intelligence based restaurant recommendation platform “SynchroLife” (http://synchrolife.org) has announced a token crowdsale starting September 22, 2017 at 15:00 GMT to back the development and implementation of blockchain technology and an original Ethereum based token into the SynchroLife platform.

After the success of the beta release of SynchroLife in Japan, the service opened globally in July. SynchroLife plans to further develop and grow the existing SynchroLife service into a blockchain based restaurant recommendation platform to provide trustworthy restaurant information and reviews worldwide.

With a belief that online foodies and restaurant reviewers deserve to be rewarded for their hardwork and content, SynchroLife will be rewarding tokens to users who contribute to the platform. These tokens may then be used for buying coupons, posting advertisements, tipping other users, making payments at restaurants and other locations through a debit card, and more, building the highly liquid SynchroLife token-based economy.

Traditional centralized restaurant review and discovery services have struggled to maintain up-to-date restaurant business information as restaurants close and open daily, and attempts to translate this for a global audience have often relied on less-than-perfect machine translation. Verifying reviews and keeping ratings for restaurants honest has also long been an issue which in many countries has led to distrust from both users and restaurants. In addition to these issues, users still often find themselves struggling to find a restaurant, as they are overwhelmed by too many choices and too much information when they search.

SynchroLife strives to resolve these issues by rewarding content creators and reviewers with tokens to incentive them to help build and maintain the platform, and keeping the approval and rejection of content on the blockchain for maximum transparency.

SynchroLife is also cutting down on the stress related to searching for restaurants by developing artificial intelligence to learn the preferences of each individual user and offer them personalized recommendations via search or a social feed.

For more regarding why we have decided to incorporate blockchain technology into SynchroLife, please see our official blog: https://medium.com/@synchrocoin/why-we-decided-to-use-blockchain-technology-with-synchrolife-46d5f19166d4

The Power of a Token-based Economy

SynchroLife’s original token made on the Ethereum blockchain, the SynchroCoin (SYC), will be used in SynchroLife as a reward to users for contributing high quality reviews, restaurant information or updates, translations, and other meaningful content to the SynchroLife platform.

The SynchroCoin is used for rewards to users, to pay for Online-to-Offline (O2O) marketing for restaurants, and even to pay for coupons and payments at participating restaurants. Through blockchain technology, the SynchroLife platform is connecting both users and restaurants together to build a mutually beneficial token-based economy.

SynchroLife Limited’s founder and CEO Tomochika Kamiya comments, “Using just gamification in the beta version of SynchroLife released in Japan we’ve seen over 32,000 users join the platform. They’ve contributed over 150,000 review, over 375,000 photos, and have already added over 35,000 new restaurants to the platform. We believe that users like this deserve to be rewarded for their contributions, and we also believe the SynchroCoin has high potential to grow and be usable in other stores and shops in the future.”

After the token crowdsale, SynchroLife plans to immediately start the development of blockchain technology and token features for SynchroLife to convert the service to a blockchain based restaurant recommendation platform by early 2018. Throughout 2018 the SynchroLife team plans to release Online-to-Offline (O2O) and customer relation management (CRM) features for participating restaurants, leading up to cryptocurrency and token payment tools by early 2019.

The current beta version of the platform (without blockchain technology and tokens) is also available free for download on iOS and Android smart phones via the App Store (https://itunes.apple.com/app/id557532449) and Google Play (https://play.google.com/store/apps/details?id=jp.co.synchrolife).