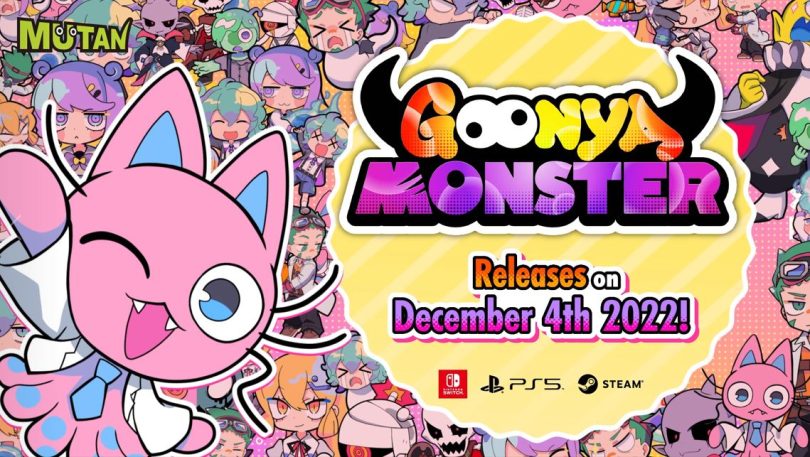 GOONYA MONSTER  is a 3 Vs 1 asymmetric PvP game, where 3 “Busters” face off against 1 “Monster”, with players controlling characters designed by the famous artist, Terada Tera.

Busters can use a unique cast of weapons, while Monsters can unleash powerful Skills to help achieve their respective win conditions.

The release date for GOONYA MONSTER has been set for December 4, 2022.

In addition to Steam🄬, the game will also be released on the Nintendo Switch™ and PlayStation🄬5.

GOONYA MONSTER is cross-platform compatible. Regardless of the platform you are playing on, you can play cooperatively or competitively with players all over the world.

The second PV introducing the game system is now on view!

The newly released PV introduces the game system of this title, accompanied by the theme song by popular artist FAKE TYPE. feat Chogakusei. In addition to the basic rules, the video introduces the ghost state after the buster is killed, the purchase of weapons and costumes, and character customization with enhanced gear. In addition, the full version music video of the theme song “GO ON YA WAY” will be released on the FAKE TYPE. channel in October.

Theme Song ：GO ON YA WAY

In August this year, their song “Utakata Lullaby” from the movie “ONE PIECE FILM RED” became the talk of the town.

She has received more than 250 million views on YouTube!His handsome face peeking out through a Venetian mask and his “ganarali-voice” that seems to contradict his face, he is a vocalist who has been the talk of the town.

Buster: Master a diverse set of weapons and

carry a fixed amount of Souls to the goal!

3 Players are Busters. Lasers, Shotguns, Flamethrowers are some of the weapons you can master to help you fight alongside other players.

Busters win by successfully carrying a fixed amount of “Souls” over to the goal. Defeat Undead enemies that spawn throughout the stage and pick up their “Souls”.

Undead enemies also attack Busters. Take them down before they take you down.

Monsters fair better in a 1-on-1 fight. Working together and coordinating your movement with your teammates is the key to victory.

If you die, you can still continue the game as a ghost!

Buster enters the ghost state when his life reaches zero. Ghosts cannot attack, but they are not attacked by monsters. You can move and carry souls as normal and can easily be brought back to life if you have buster near you.

If you work well with your mate, you can even carry souls through monster attacks……?

Monster: Send those pesky Busters flying with your extravagant Skills!

1 Player is a Monster. Prey on an enemy until they die using the special technique “Predation”. Utilise a “Skill” unique to that Monster to fight against the Busters.

The Monster wins by taking down all the Busters, or by reaching the match time limit.

Predation can be interrupted by attacks from other Busters. Do your best to avoid their attacks, and make sure there aren’t any leftovers.

Monsters have unique Skills. Maybe a Buster hiding within the walls can be crushed along with the bulding?

Repeat matches and collect “Soul Coins” to get weapons and costumes!

Weapons and costumes can be obtained with “Soul Coins”, an in-game currency that is awarded based on performance in matches. Weapons are divided into several categories, each with different strengths. Costumes, on the other hand, are not related to performance. Collect as many as you can and enjoy coordinating them freely.

You can dress-up your character in 3 places: the head, the body, and the face. The lineup ranges from super-cute to a-little-weird.

What you end up looking like depends on the current item lineup and the player’s sense. Enjoy trying out a bunch of different outfits! Find a weapon that is easy for you to use from a variety of types. 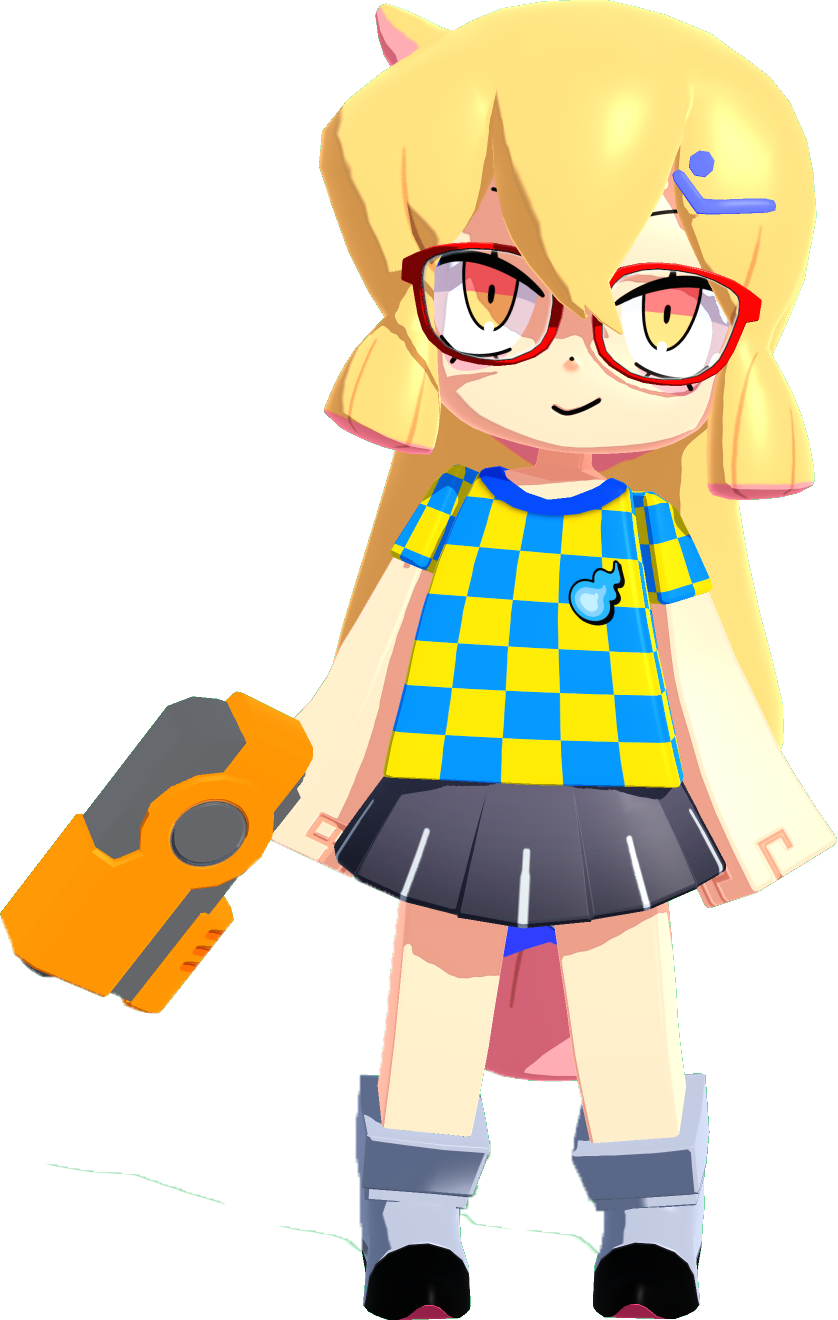 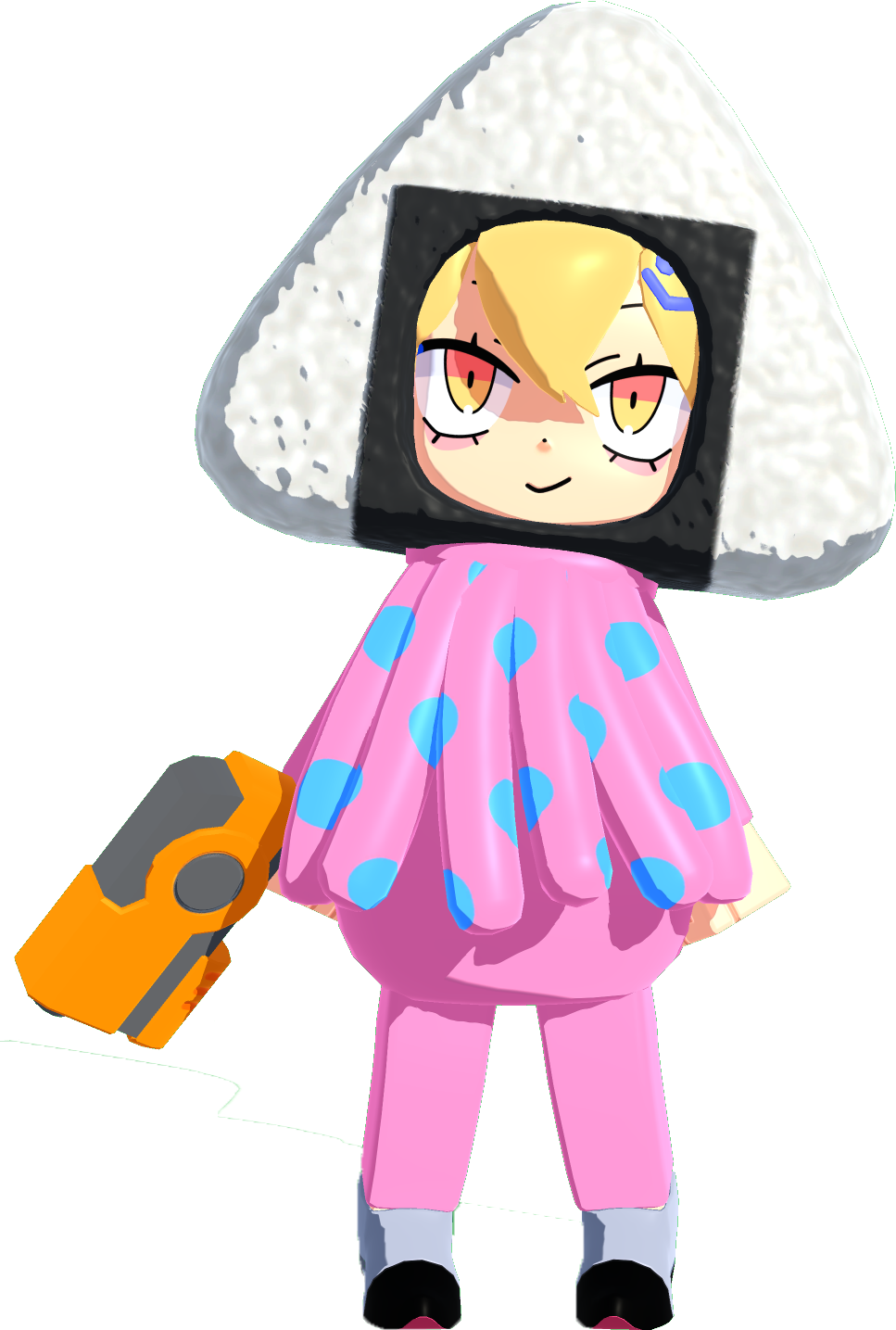 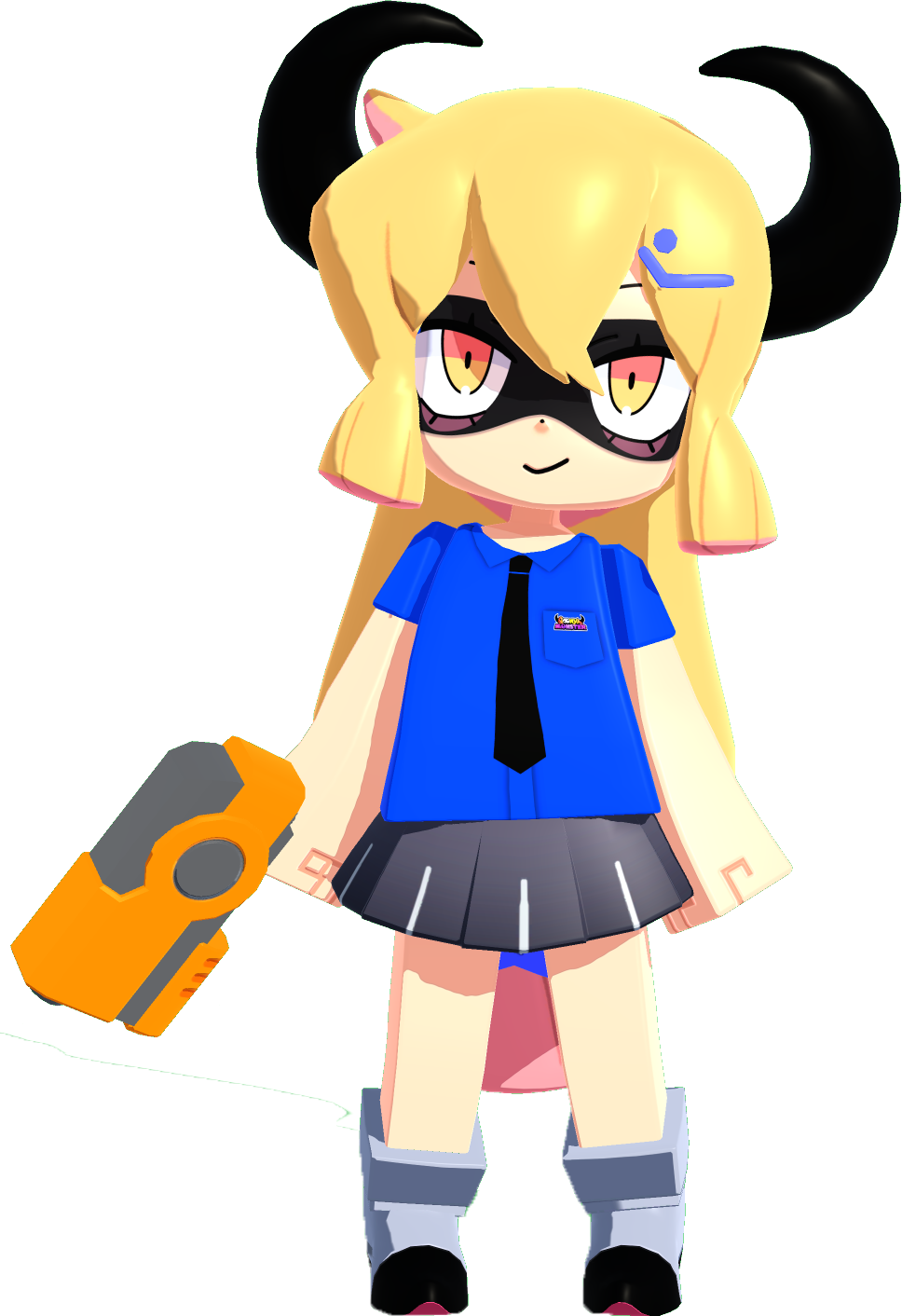 Stand out from other players with your own unique coordination.

The performance of a character can be raised with “Enhancement Gear”. Equipping this Gear provides special effects such as increased attack power.

Enhancement Gear can be purchased and reinforced with Soul Gems, which can be obtained by fulfilling certain conditions in matches. Equipped with jump power up Gear, you can even jump as high as this!

Earn “Soul Coins” and “Soul Gems” by competing in “Episode Match” and customize your character as you go!

“Soul Coins” and “Soul Gems”, which are necessary for customization, can be obtained from “Episode Match”. Enjoy the cyclically unfolding storyline and regularly added stages, while competing against online players.

Up to 4 players can play in an Episode Match. Invite your friends to play together. Up to two people can participate in an online match from a single console. There are various locations for the stages. More locations will be added in future updates.

An incredible cast of Voice Actors known across multiple hit media titles are here to voice the characters designed by Terada Tera. Not only can you set the match voice-over, but you can also set the Menu and System voice-over as well. Stay tuned for even more Voice options in the future. An avid cat lover. Gets hyped up when it comes to cats. A 10-year old girl that goes about life at her own pace.

Her moral compass is slightly off, with no hesitation when it comes to unloading her weapon.

She took up Goonyan’s offer of becoming a Buster for the simple reason of wanting to fight. She’s always the top of her class in school and athletic to boot.

She’s from a well-established family but that doesn’t stop her from feeding her darkest secret; spending all her money shopping and pulling on gacha.

She’s in it for the money. A sloppy 28-year old scientist. The thing he hates the most is himself.

He’s knowledgeable when it comes to weapons. Capable of maintaining and modifying the weapons.

He holds himself responsible for the group and felt as though he had no other choice but to fight with them. 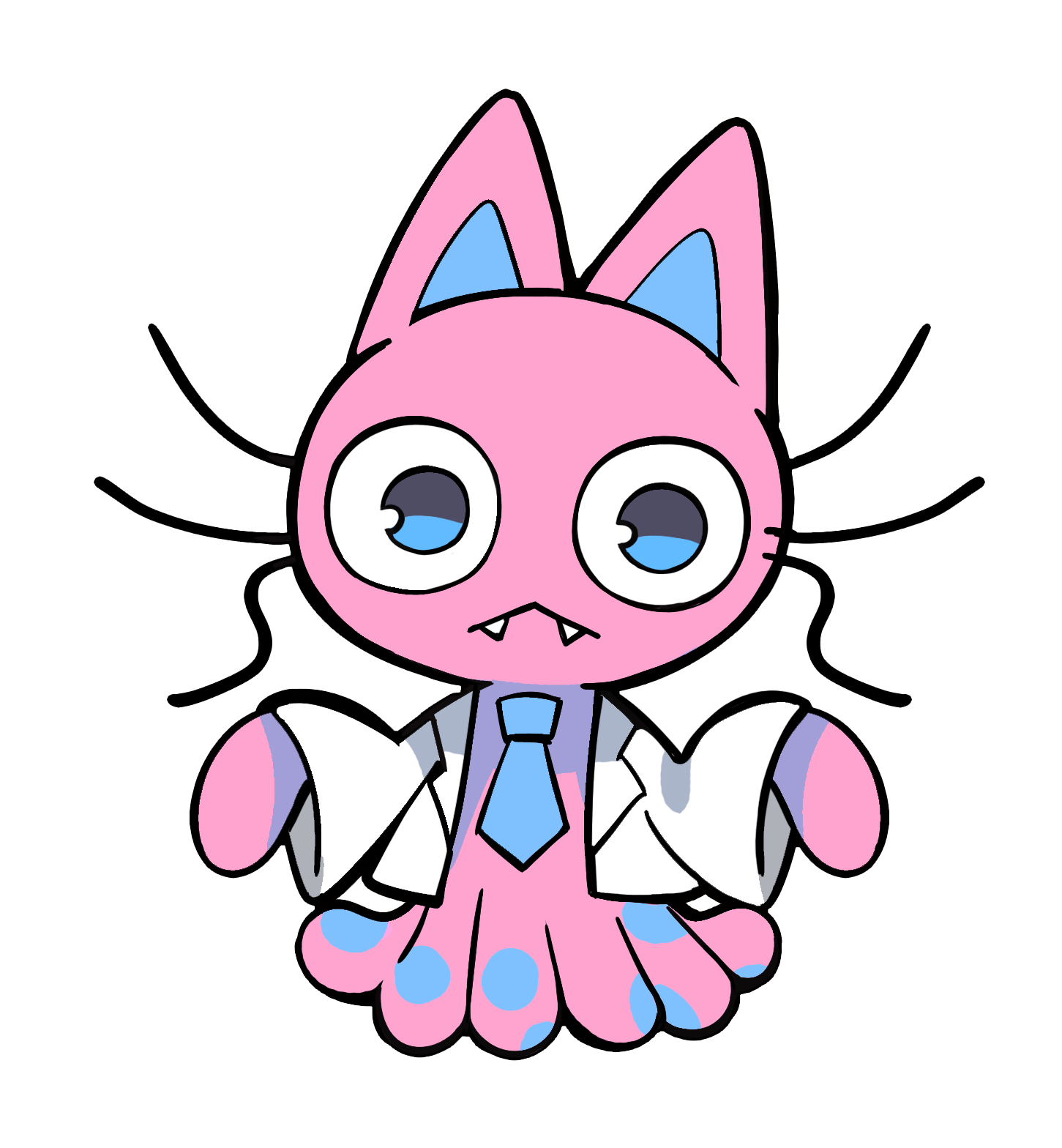 A friendly and mysterious half-baked Monster. It has the head of a cat but its limbs are tentacles.

Persuaded Octo and the others into fighting by giving them all weapons. Goes berserk and feasts on the Buster in an instance! Throws a bomb that explodes when it hits a Buster or the surrounding terrain! Flies high into the sky using a balloon and rains explosives from above!

There’s plenty of other Monsters to choose from! Play to find out for yourself !