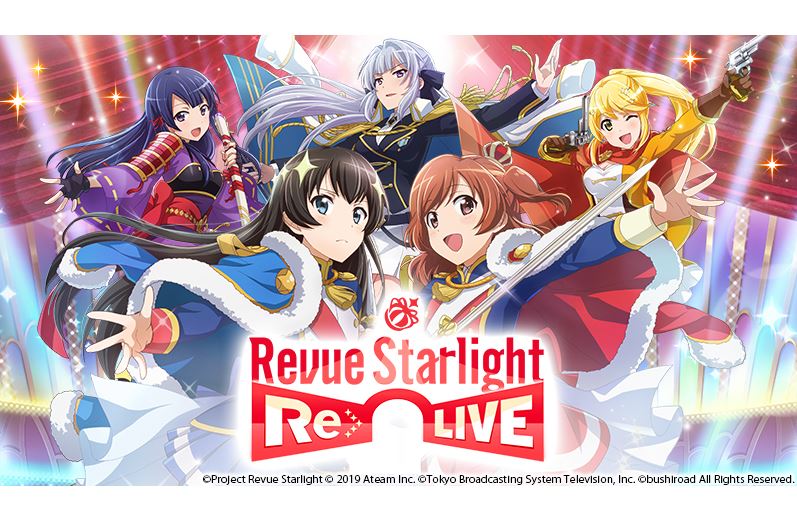 Released in October of 2018 in Japan, the game quickly gathered a large following and climbed the sales charts to reach number 10 on the iTunes App Store and number nine on the Google Play Store. As of today, April 2, 2019, pre-registration for the global version of Revue Starlight Re LIVE is under way with registration possible from the iTunes App Store, Google Play™, and official Starlight website. Claim Karen Aijo and others for a total of nine Stage Girls from the Seisho Music Academy cast when the combined number of pre-registrations reaches 90,000.

▼24 Quirky and Lovable “Stage Girls”
15 new “Stage Girls”, made specially for Revue Starlight Re LIVE, appear alongside the nine “Stage Girls” of Seisho Music Academy featured in the musical and anime series, making for a total of 24 characters. Voicing these characters is an all-star cast of Japanese voice actresses. ▼Exciting Turn-Based Battles
Players tap panels to select the actions their “Stage Girls” will take in battle. Each action will fill their “Brilliance Gauges”, which can be used to perform a stunning “Climax Revue” when full. When a “Climax Revue” is set in motion, the music will change to a song suiting the active character and players can activate special “Climax Acts” unique to each character. Additionally, if two or more “Stage Girls” perform a “Climax Act” and if special conditions are met, they can perform an even more impressive “Finishing Act” following the next turn.

With player-versus-player battles also available to enjoy, players will have endless fun raising their “Stage Girls” and coming up with strategies for battle.

▼Intricate Growth Systems
There are numerous ways players can power up their “Stage Girls”, such as increasing their levels with experience points, unlocking skill panels, and giving them gifts. Giving them enough gifts will also reveal original stories for players to enjoy.

Additionally, players can set special items called “Memoirs” to their “Stage Girls” to power them up even further. “Memoirs” are meaningful memories of the characters that have been depicted as illustrations.

▼Numerous Outfits for Each “Stage Girl”
The “Stage Girls” appear in numerous outfits, and their visuals and voice samples change accordingly. Players will surely enjoy seeing their favorite characters perform different abilities based on the outfits they wear.

▼About Revue Starlight
Based on the concept of the same cast performing in both musicals and animation, the project first began in September of 2017 with the release of the musical. The songs and dances performed became a sensation, and the musical was quickly brought back in January of 2018. In that same year, the anime series was broadcast on television in July and the newest s More information on Revue Starlight Re LIVE and its global release will be announced in the coming days and weeks.

■About Bushiroad
Bushiroad Inc. is a company that operates numerous forms of entertainment including trading card games, smartphone games, live events, and more.

■About TBS
TBS is one of Japan’s premier media companies, specializing in television broadcasting and more.