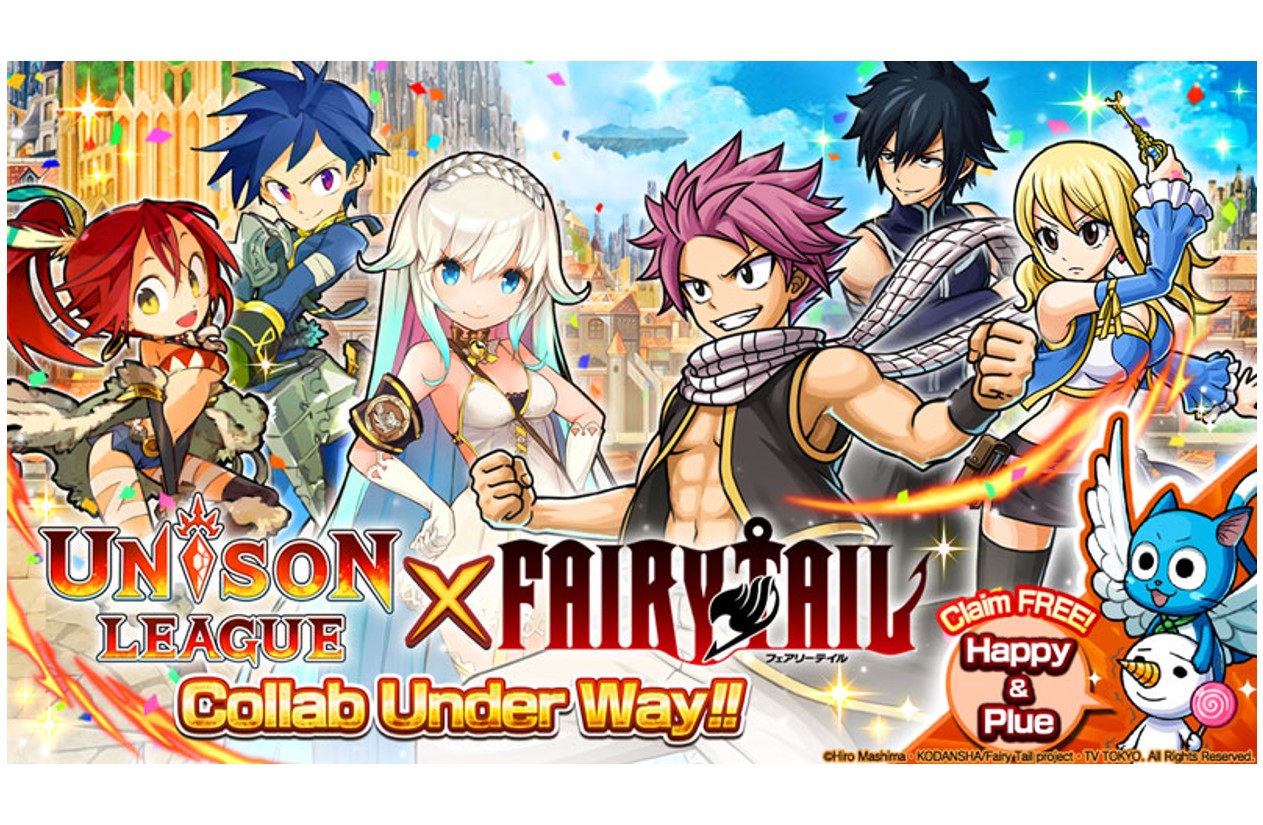 FAIRY TAIL’s Magicians Natsu, Lucy, Gray, and Others Are Heating Things Up in the World of Unison League!

Unison League has joined forces with popular Japanese anime TV series FAIRY TAIL to bring players a special collaboration event, officially licensed by KODANSHA, starting March 15, 2018. In this tie-up, the Mages Natsu, Lucy, and other members from the Guild “FAIRY TAIL” are making their way into the world of Unison League. During the collaboration, players can enjoy challenging Quests that recreate the Grand Magic Games, a festival where participants compete with various types of magic. Fight alongside Gray in the Battle of FAIRY TAIL and enjoy an original story in the Quest line Guild: FAIRY TAIL as you progress through the collaboration.

▼Highest Rarity UR “Happy & Plue” Gift for All Players!

All players that log in during the above period will obtain top-rarity UR “Happy & Plue”. Make sure you don’t miss this chance to bolster your collection just by logging in!

*Only one “Happy & Plue” can be claimed per player from this login bonus. Collaboration-exclusive Guild: FAIRY TAIL Quests have begun. Navigate your way through these Quests for a chance to obtain cosmetic hair and face Gear of FAIRY TAIL characters. Equip them and look just like your favorite FAIRY TAIL character! The completely original 13-chapter story, filled with fun and excitement, will have you storming through the Quests in anticipation of what happens next!

Natsu and his FAIRY TAIL Guild members are enveloped in a mysterious light upon opening a magical book. When the light fades, an unknown world stretches out before them.

Natsu and friends begin their new adventure in the land of Granvia! Prestige can be obtained by clearing exclusive collaboration Quests Battle of FAIRY TAIL, Black Wizard Zeref, and the Grand Magic Games. Gather Prestige and finish with a top ranking to obtain an SSR “[CP] Lucy” that can be Reforged into “[H & P] Lucy”. Unleash her potential and gain the ability to recover Cost and Unison Gauge. Furthermore, by gathering the required amount of Prestige before 3/22 (Thu.) 1:59 a.m. Unison Time, players will be rewarded with a time reward SSR “[CP] Lucy”. SSR “[CP] Lucy” comes with special event effects that help you to progress through the event more smoothly. Additionally, Collab Box Spawn Tickets (“Happy’s Fish”) and more can be obtained by gathering Prestige. Rewards obtained in Box Spawns include SSR “[Crimson Sakura] Erza” Summoning Scroll, “Happymin”, “Pluemin”, and materials needed to Reforge “[Crimson Sakura] Erza” to UR “[For the Guild] Erza”. Clear event Quests and get exclusive rewards! ▼Laxus Arrives as a Boss in Battle of FAIRY TAIL!

Join forces with Gray and take on Laxus in the exclusive Quest, Battle of FAIRY TAIL. Gray will aid your forces and join you with his special in Unison Attacks! ▼Black Wizard Zeref Guerilla Quests Under Way! Put a Stop to the Mysterious Zeref and His Wild Ambitions!

Challenge the legendary Mage Zeref in the exclusive super-challenging guerilla Quests Black Wizard Zeref. Up to 8 members can participate in this intense boss fight. Cooperate with your comrades and put a stop to Zeref! ▼Super Difficult Quest: The Grand Magic Games Are Under Way!

Collaboration-exclusive high-level content, the Grand Magic Games, are under way. Players can enjoy difficult Quests that recreate The Grand Magic Games, a festival where participants compete with various types of magic. 5 Members from the Guild FAIRY TAIL will show up to test your strength! More events and campaigns are in the works in hopes of delivering enjoyable content to our players around the world. We hope you continue to enjoy your time in the world of Unison League.

Mage guilds… Originations that take on requests and resolve them with magic. One of the top guilds, FAIRY TAIL, is making their mark in history!