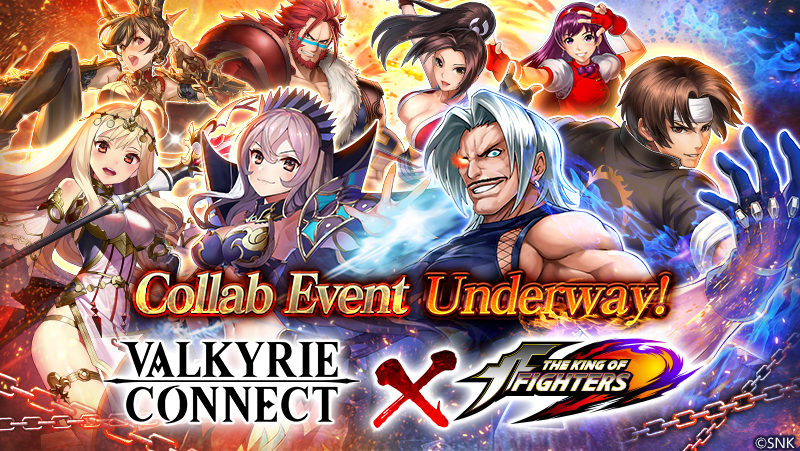 The event began 9/5 (Tue.). Through the event players can add popular characters such as “Athena Asamiya” and “Kyo Kusanagi” to their collections of heroes in “Valkyrie Connect”. Exclusive events featuring “THE KING OF FIGHTERS” characters such as the story-based “Invitation From Another World” and “Omega Rugal Strikes!” Connect Battle are also available. Players who log in during the collaboration period can also receive the “Shiranui Fan” gear for free simply by logging in. Damage a distant enemy with ATK damage and buff your own SPD and EVA. Play Through an Original Story in the “Invitation From Another World” Quests!

Play through a story in which the characters of “Valkyrie Connect” journey to the world of “THE KING OF FIGHTERS” in the collaboration-exclusive “Invitation From Another World” quests. Players can earn “Kyo Kusanagi” and his specialty gear by completing these quests. “Kyo Kusanagi” has boosted stats in the “Omega Rugal Strikes!” Connect Battle so players will want to be sure to take advantage of this opportunity! Skill: Inflict Fire damage and Burn effect on nearby enemies Inflict Burn effect on a nearby enemy and boost Kyo Kusanagi’s skill gauge. Fight and Unlock “Omega Rugal” in the Players can join the collaboration-exclusive “Omega Rugal Strikes!” Connect Battle for a chance to unlock “Omega Rugal” as a playable hero. Additionally, players can earn “Omega Rugal Tokens” which can be exchanged for powerful exclusive gear.

“Iori Yagami” and “Athena Asamiya” appear for a limited time in “Valkyrie Connect” in the “KOF Collab Summon”. One of these heroes is guaranteed on the third and fifth “10x summon” performed! These two heroes both have their stats boosted in the “Invitation From Another World” quests and the “Omega Rugal Strikes!” Connect Battle, so players who put them in their party will have an advantage in battle.

Skill: Dark and non-elemental damage and Curse effect to the enemy with the lowest HP Skill: Light damage to a nearby enemy and buff the HP of allies. The first installment in “THE KING OF FIGHTERS” (“KOF”) series of fighting games was released to arcades in 1994 and featured three-on-three battles. The cast features popular characters from other SNK games such as “Fatal Fury”, “Art of Fighting”, “Ikari Warriors”, “Psycho Soldier” and more. “KOF XIV”, the 14th game in the main “KOF” series, was released in 2016 to worldwide acclaim.

Ateam is a smartphone game and tool developer that produces high quality applications enjoyed by millions around the globe. Among Ateam’s repertoire are internationally acclaimed titles “Dark Summoner”, “War of Legions”, and “Unison League”.

“War of Legions”, released in August 2013, reinvented PvP battles being the first smartphone game to feature guild battles in real-time between players around the globe. To date, “War of Legions” has achieved two million downloads worldwide.

“Unison League” hit app stores the world across in May 2015 and soon after climbed up the North American iTunes App Store grossing ranks to 54th place.

“Valkyrie Connect” is a high fantasy RPG that combines Norse mythology with a unique Japanese anime flavor. Created by the all-star team that made Ateam’s hit “Unison League”, “Valkyrie Connect” rocketed up the Japanese sales charts shortly after release and was chosen as one of Google Play’s top games of 2016 in Japan.

Players assemble a collection of heroes, villains, gods and more to fight in full 3D real-time battles. The co-op Connect Battles are the game’s signature feature, and require players to fight alongside one another in real time to take down massive bosses. With a simple battle system perfect for mobile devices, complex party composition, and excellently written characters, “Valkyrie Connect” has earned its place at the top. Additional updates and coming content will continue to cement it as the premier RPG for mobile devices! Supported operating systems and devices: iOS 8.0 or later recommended, devices that come with Android™ 4.2 or later (excluding some devices)

*Campaign details may be changed at any time without prior notice.