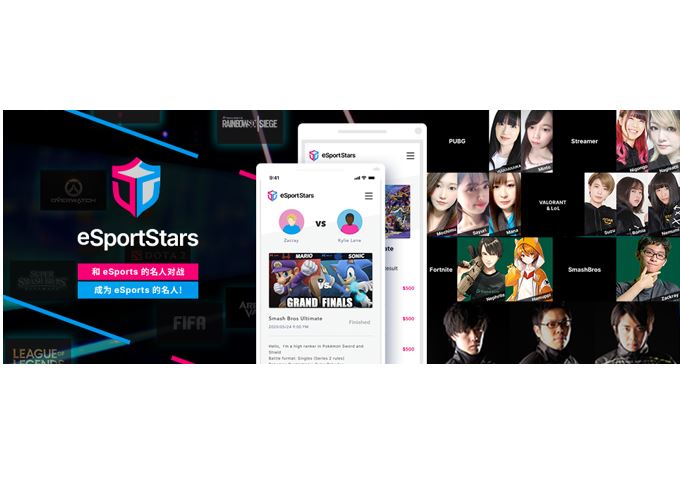 – Aiming to promote esports by providing the chance to earn money through competitions and a cryptocurrency reward service.

“eSportStars” is for everyone including professional esports players, fans and players aiming to become professionals around the world. It is an unprecedented service that offers all players the opportunity to find suitable opponents to play against as well as hosting tournaments and competing in popular esports games beyond geographical boundaries. (Supported languages: Japanese, English, and Chinese)

Once pre-registration is completed, tickets can be sold and purchased within eSportStars.

Fans can support their favorite players by competing against them and players can earn money while training to improve gaming skills.

As well as game competition tickets, there are other types of tickets that the sellers can offer. For instance, the ideas can be based on what they are good at or what they like to do, such as “teaching how to improve gaming skills”, “having a passionate chat about favorite games”, “teaching how to become a professional esports player”, etc.

Furthermore, users will be rewarded with a cryptocurrency, TimeCoin (TMCN) for their competition results. TimeCoin can be used within eSportStars and users can save up TimeCoin to buy competition tickets, which certainly helps users to access more competitions and to improve gaming skills.

JapanKillerAngel is the first female Japanese professional esports team to own a gaming house globally and it is run by Killer Angels Co., Ltd. Currently, the team has 3 divisions: the PUBG division, the VALORANT division and the Streamer division. The players are actively engaging in esports as professional athletes while participating in tournaments and updating news.

JapanKillerAngel represents the best of the best as a domestic female team, as it consists of elite athletes chosen from a large pool of female players, aiming to reach the top in Japan and in the world as a professional team. The popularity of women’s professional esports teams is growing worldwide. JapanKillerAngel continues to improve to compete in the world as a representative of Japan for the Women’s World Competition as well as the Esports Olympics and the World Cup that are anticipated to be held in the future.

YUUUUUUUKA is currently the team leader. Although PUBG is her first PC-based FPS game, she has an incredible playing record of about 8,000 hours.

As well as being a warm and gentle person who cares about the team members, she also has a playful side. Once you get to know her, she might surprise you with unexpected jokes!

Nigongo is a player that symbolizes Japanese women’s esports with an excellent track record in numerous competitions.

She is well-known as a top female player for both experience and ability and is popular with a wide range of fans. Her recent engagements include appearing in famous programs in Japan and overseas and being selected as an official ambassador for overseas competitions.

Suzu is the first professional female esports player from esports technical schools in Japan, who is a leader of the Valorant team. She is having a very aggressive and technical playing style. Before LOL, she has played as a clan in CS: GO.

GameWith formed a professional team in 2018 in order to create a new society where people are passionate about games, are connected through games and are proud of making a living playing games. Many of their professional gamers are actively engaging in esports globally representing Japan.

Aside from his play skills, his dedicated approach to enjoying the moment has attracted a wide range of fans in a short time. He has consistently been doing well in competitions.

Zackray is the strongest battle player in Japan! His calculated play attracts the audience and he was the only Japanese person to be invited at an invitation-only competition (total of 16 people) held in the United States.

“TeamYAMASA” is Japan’s most renowned Tekken professional team. TeamYAMASA competes in the Tekken World Tour and have been engaged in many official events in Japan.

They are multi-talented; not only competing as players but also engaging in MC/commentary roles. All the members hold JeSU official pro licences.

Yuu is a legend who has been a top player on the front line since the Tekken 5 era.

He maintains a good balance of offence and defence. He makes speedy and calculated judgements for the next move in a play and often showcases outstanding performance that excites the audience.

Yuu and his team mate, NOBI, began their journey as the first professional Tekken gamers in 2015. Yuu is a leading person with outstanding accomplishments not only in Japan but also around the world.

TAKE excels in defence like an iron wall called “the strongest shield in Japan”.

His play style, which gives his opponent a sense of despair, is often called the “ultimate Tekken style” that only he can reproduce.

He is a dad who devotes his life to Tekken, making a living out of Tekken for his wife and children.

With his conscientious and dedicated personality, he has recently achieved a new highest record as a Japanese player in EVOLUTION 2019.

NOBI has won first place in the World Competition three times, which marks his performance as at the highest level in Japan.

In Tekken 7, where “defensive style” is the mainstream, his super-attack approach attracts the audience and beats the opponent with overwhelming pressure.

His unique personality has helped him to gain popularity in competitions and streaming videos.

He has been contracted to do “Tekken training” by the Game Centre and has recorded several thousand bookings so far. As the training is so popular, the bookings are filled on the same day.

Helping the children who have been affected by COVID 19

・”TimeTicket”, a service that connects people who want to buy and sell skills.

・Development and operation of “TimeTicket Pro”, project/job site for freelancers.

・Development and operation of other web services.