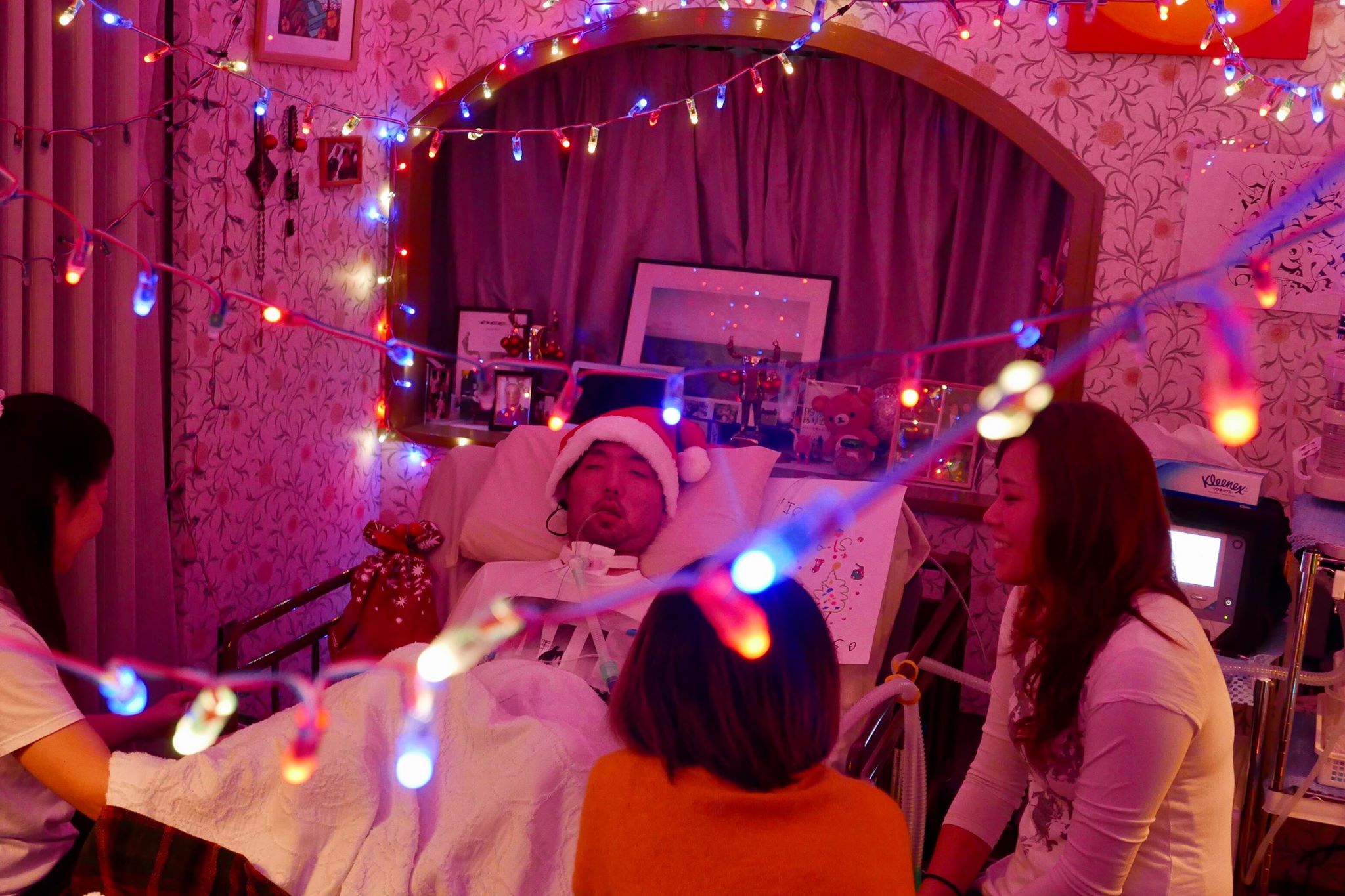 The END ALS Association (Representative: Motoi Ito, Tokyo, Japan) announced the launch of their  Merry & Bright – EEG Illumination project. The objective of this project is to enable Masahiro “Hiro” Fujita, an ALS patient and founder of the association, who has lost all movement and almost all means of communication to share his Christmas spirits with his loved ones using his brainwaves to light up colorful Christmas illuminations.

Most of the time Hiro is stuck at home, in his bed 24×7. Communication is also becoming more and more difficult as he has lost his facial expression as well the ability to communicate smoothly with his eyes. In order to enable Hiro and his friends to connect and share the heartwarming and joyful Christmas spirit, NeuroSky’s mindwave headband (EEG biosensor technology) was connected to the Christmas illuminations by LAB 13, MRM//McCann’s innovation studio. The headband was placed inside a Santa hat, as Hiro wears the Santa hat the illuminations reveal his mind in different colors.

Hiro’s room was designed by Yohei Taneda, the Hollywood production designer and the film shot by Kensaku Kakimoto, film director, who has been the author of all past END ALS films. Both talent coming together in support of this good cause.

Hiro was diagnosed with ALS in 2010 just before his 31st birthday. This is his 10th year battling the illness. In 2014, the ice bucket challenge brought ALS under the spot light, however, this cruel illness is not fully understood nor has a cure been found. Another objective of this project is to further spread the word, awareness and understanding in hope of finding the cure and getting rid of this illness as soon as possible.

Goal: enable Hiro and his friends to connect and to raise awareness of ALS and find a cure.

About Masahiro “Hiro” Fujita: Hiro, currently age 40, was born in Tokyo in 1979. He is a planning director at the international advertising agency, McCann Erickson Japan. He joined McCann Erickson in April of 2004 and was assigned to the Strategic Planning Division, where he planned and developed PR/influencer marketing and brand communication strategies. He was diagnosed with ALS in November of 2010. He became wheelchair-bound the following March and was placed on an artificial respirator in January 2012. In January 2013, he received a tracheostomy and lost his voice to speak again. Since then, he continues to carry on his work at the ad agency and activities for END ALS using the Tobii eye-tracking system, which allows him to operate a computer with blinks and eye movement. His book, “99% Thank You: Things Even ALS Can’t Take Away,” was published in November 2013. He has won numerous awards at the Cannes Lion, ACC Japan with his STILL LIFE project – https://end-als.com/#still

About ALS: Amyotrophic lateral sclerosis (ALS, also known as Lou Gehrig’s disease) is an intractable disease characterized by the gradual weakening and atrophying of the muscles in the entire body, including that of the limbs, throat, tongue, and that required for breathing. Meanwhile, bodily sensation, such as cognitive function, vision, hearing, and functions of the internal organs, remain intact. With the advancement of symptoms, in most cases, eye movement eventually becomes the only means of communication. Some patients even lose this ability and enter a “total locked-in state” in which all muscle movement is completely lost.

(1)  To work to establish a treatment for ALS