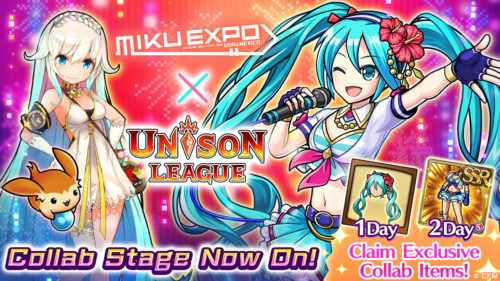 For a Special Collaboration Stage Event!

All players that log in during the below period will obtain exclusive UR-Reforgable cosmetic Gear pieces “Summer ’18 Miku Outfit” and “EXPO ’18 Miku Hair”. Don’t miss this great opportunity to give your character a Miku touch.

*Only one “Summer ’18 Miku Outfit” and one “EXPO ’18 Miku Hair” can be claimed per player for this login bonus. Clear the collab-exclusive Quests “MIKU EXPO ’18 -Stage 1-“ to obtain Glow Sticks. Stack up enough Glow Sticks and you’ll bag yourself SSR “Tiny Rin & Len” which can be Reforged to UR rarity. UR “[Cheery Fairies] Tiny Rin & Len” has an awesome Unison Skill that that recovers Cost and continuously recovers the Unison gauge, so make the most of this to aid your allies! “MIKU EXPO ’18 -Stage 1-“ Quests that feature “Himiko” as the boss have begun. In these original Quests, “Hatsune Miku” appears as an aide wearing a collaboration-exclusive outfit. Fire off a Unison Attack and Hatsune Miku will begin singing the theme song of the concert tour “Decade feat. Hatsune Miku” (Lyrics and music: Dixie Flatline) while a special animation plays out. The Unison League gentleman mascot appears as “Mikumin”. The oversized Miku-themed Limimin appears as the Quest boss wreaking havoc. Subjugate the Mikumin and put an end to his reign of terror to earn tons of Prestige. Make the most of these Quests to earn Prestige efficiently and obtain grandiose rewards! ・Removes status ailments from your character.

・Reduces physical/magic damage received by yourself to 0 for 2 times.

・Fills the Unison gauge of all allies excluding yourself by 20.

・Increases the Unison gauge gains for yourself by 3 for 50 seconds.

・Reduces your status ailment resistance by 30 for 60 seconds [Demerit]. ・Ability Power 260. Damages all enemies 2 times with magic time damage with a success value of 260.

・Reduces the Ability Power of physical and magic damage taken by all allies by 30 for 60 seconds.

・Increases the critical hit chance of all allies by 40% for 60 seconds.

・Increases the critical hit damage of all allies by 30% for 60 seconds.

・Recovers 25 Cost for all allies. ・Ability Power 240. Damages all enemies 3 times with magic light damage with a success value of 100.

・Reduces action speed of all enemies for 60 seconds (affects CPU targets such as enemy monsters).

・Reduces the Cost recovery speed of all enemies for 60 seconds.

・Recovers 20 Cost for all allies.

・-Reduces Ability cooldown times (except for certain Abilities) for all allies by 20% for 60 seconds.

[Weapons] From left to right

Hatsune Miku is music software developed by Crypton Future Media, Inc., and it enables anyone to make the computer sing by entering lyrics and melodies. As a massive number of users created music using the software and posted their works on the Internet, Hatsune Miku quickly evolved into a cultural phenomenon. Moreover, Hatsune Miku has gained much attention as a character, involved in many fields such as merchandising and live performance as a virtual singer. Now her popularity has spread across the globe.