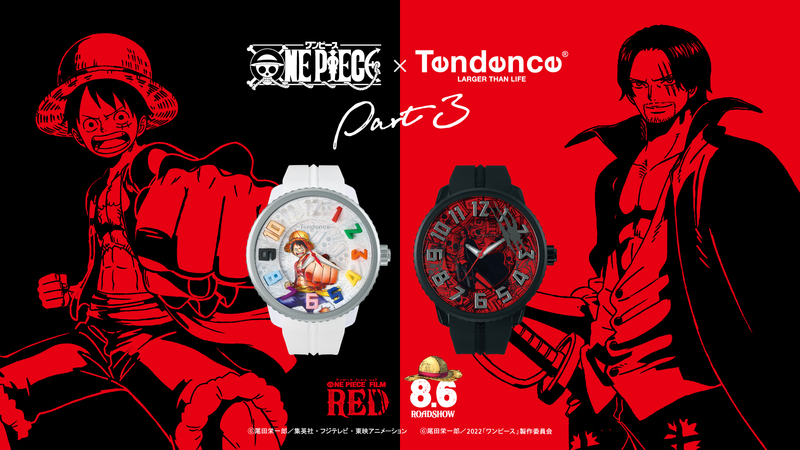 Collaboration to commemorate the latest film “ONE PIECE FILM RED” and the 25th anniversary of the original comic series.

Collaboration to commemorate the latest film “ONE PIECE FILM RED” and the 25th anniversary of the original comic series.

The “ONE PIECE Collaboration Vol. 3” watch will be available in two types. One is the “Luffy Model” featuring “Monkey D. Luffy,” the captain of the “Straw Hat Pirates,” and the other is the “Shanks Model (Red ver.)” featuring “Shanks,” the leader of the Red-Haired Pirates and one of the Four Emperors.

Each watch will also come with an original notebook as a purchase bonus.

The “Luffy Model” features the main character, “Monkey D. Luffy,” the captain of the “Straw Hat Pirates,” boldly appearing on the dial of the watch. In the center of the watch is an original character in a three-dimensional pose drawn for this collaboration, directly expressing the world view of ONE PIECE. The colors of the numerals 1-10 on the indexes (numerals) follow the image colors of the “Straw Hat Crew” crew members. While the overall color scheme is based on fresh white, the colorful dials express the brightness and power of the “Straw Hat Crew,” creating a design that is sure to excite.

The leader of the Red-Haired Pirates, and Luffy’s idol. The “Shanks Model” is designed by “Shanks”, one of the Four Emperors. Shanks Model (Red ver.)” is a cool and mature image based on the image of red, the image color of Shanks and “ONE PIECE FILM RED,” the latest movie version to be released on August 6 (Sat.). Limited edition of 250 pieces.

What is ONE PIECE FILM RED?

“ONE PIECE” has been serialized in Weekly Shonen Jump since 1997, and in 2021, the total number of comics sold worldwide will exceed 490 million copies, and the number of books in the series will reach 100 volumes. The TV anime has also surpassed 1,000 episodes. In July 2022, “ONE PIECE,” which continues to set milestones in both manga and anime, will finally reach its 25th anniversary. In this anniversary year, “ONE PIECE FILM RED” is the fourth installment of the “FILM Series” presented by Eiichiro Oda, the overall producer of “ONE PIECE FILM RED. Directed by Goro Taniguchi (“Code Geass” series), “ONE PIECE FILM RED” will leave a new story “RED” in your heart in the summer of 2022.

Uta is the most beloved singer in the world.

Her voice, which she sings while keeping her true identity hidden, has been described as “otherworldly.

She will appear publicly for the first time at a live concert.

The pirates are excited, the Navy is watching closely, and the audience has come to enjoy her singing voice without knowing anything about it.

The venue is filled with all kinds of Uta fans, including Luffy’s band, and the world is about to hear the long-awaited voice of Shanks.

The story begins with the shocking fact that she is Shanks’ daughter.

Tendence is a watch brand born in Switzerland in 2007. It was founded by Filippo Giardiello, who has been involved in the watch business for three generations, and Gabriele Ghielmini, who was active in the fashion industry.

One of the brand’s characteristics is its innovative design, a fusion of Italian design and Swiss quality, based on the concept of “Larger Than Life. Many famous athletes, actors, models, artists, and others who are particular about fashion choose this watch as a fashion watch.

In 2014, Tendence’s first flagship store in Japan opened in Tokyo, Omotesando, offering one of the largest selections in Japan. 2017 marked the 10th anniversary of Tendence’s birth, and in 2018, the company celebrated the world’s first new collection “De’ Color” using design technology and the very popular anime “ONE PIECE”. In 2021, TENDENCE will unveil “JAPAN ICON,” which expresses Japan by incorporating ukiyoe, a type of woodblock print popular overseas, into its designs, attracting attention for its bold yet delicate designs. The bold yet delicate design has been attracting attention. This year, 2022, marks the 15th anniversary of the brand.

The image material of “Tendence x ONE PIECE Collaboration” is here