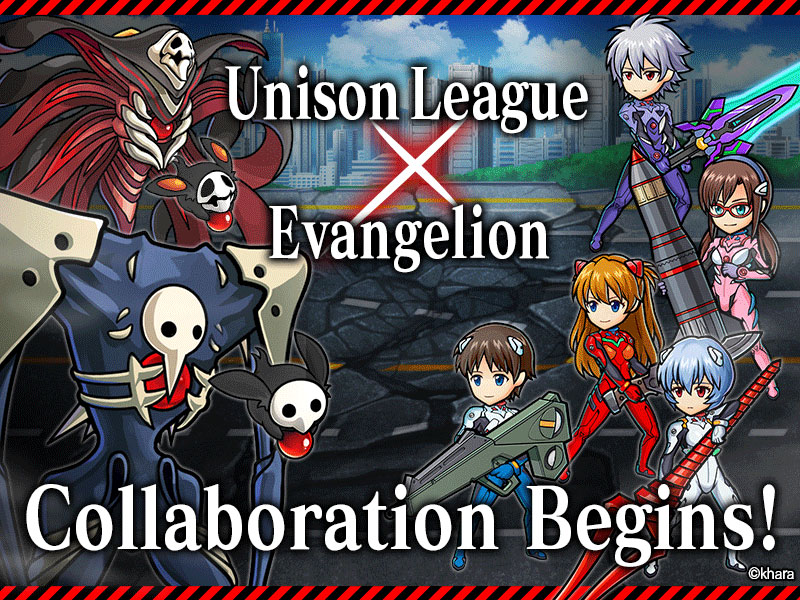 Transform Your Character Into Shinji Ikari or Rei Ayanami,

Unison League is a real-time action RPG created by the popular Japanese developer Ateam. In the game, players fight it out in fierce 10-on-10 real-time battles and unleash super powerful moves known as “Unison Attacks” that require up to five players to cooperate and activate at the same time. Players can not only choose from a myriad of weapons and armor to equip to their avatars, but they can also customize their character’s appearance from over four billion possible combinations to create a truly unique character. Players who like to socialize enjoy the in-game chat feature as they can talk strategy when things get serious or talk smack when the mood is more lighthearted.

In this unique collaboration between Unison League and Evangelion, Shinji Ikari, Rei Ayanami, and other characters from

the popular series appear in Granvia, the turbulent world of Unison League. Exclusive Quests have also been added for fans to play as their favorite protagonists and take on the menacing Angels. In total there are six different limited-time components of the collaboration for players to sink their thumbs into!

① Obtain Race Queen Rei Ayanami and Up to 10 Gems Just by Logging In!

Claim Rei Ayanami in a race queen outfit the first time you log in during the above period. Also, chance to claim up to 10 Gems, so make sure to log in every day! “Evangelion Racing Rush” Quests exclusive to this collaboration are now available. Complete these Quests for a

chance to get hair and face customization items modelled on legendary Evangelion characters. The wholly original 16- ③ Dominate the Ranking Event to Get UR [RQ] Asuka (P) and Exclusive Collaboration Customization Items!

Climb to the top of the rankings in the event and bag yourself exclusive UR-rarity character [RQ] Asuka (P), Asuka with a parasol in a seductive race queen outfit. High rankers will also be rewarded with a chance at customization items and Furniture for the Room feature only obtainable from this collaboration event!

*The ranking event is broken into two halves and UR [RQ] Asuka (P) is the reward for the first half. Throw up a set amount of Evangelion characters when a Unison Chance comes around to summon Evangelion Unit-01 to deliver a mighty Unison Attack! This completely original attack animation, which features Evangelion Racing machines fusing with the iconic unit, is sure to blow you away!

During the above period, the lobby background with be given an Evangelion overhaul. Character comments and Quest

boss warnings are just some of the other places you’ll feel the Evangelion takeover! To celebrate this momentous collaboration, an enhancement campaign is now under way. Level caps have been increased, Element Rush Quest AP costs have been halved, and other special bonuses have been added to help players beef up their characters! See below for campaign details.

・Bonus Gem campaign added. Get up to 100 free Gems!

and as exciting as possible.

Rebuild of Evangelion is a Japanese animated film series that first debuted in 2007. The latest addition to the series, Evangelion: 3.0 You Can (Not) Redo, (the third title in the four-part series) was released in November 2012 and saw more than 3.8 million fans flock to the cinema screens. It also cleared more than 52 billion yen, or at the time, 60 million US dollars in box-office takings. Evangelion enthusiasts around the globe patiently await the fourth and final installment in the series, Evangelion: 3.0+1.0, which is still yet to be given a release date.

Evangelion Racing is a real-life racing project created through the amalgamation of the well-known animated series “Rebuild of Evangelion” and a racing team. It was established in 2010 and is this year celebrating its seventh year in the fast lane. The project features racing machines with aesthetics inspired by the notorious giant robot “Evangelion Unit-01” from the animated series. Eye-catching models dressed up as characters such as Rei Ayanami also add a cheeky touch to the racetracks. In the two-wheel category, Evangelion Racing participated in the Suzuka 8-Hour Endurance Road Race and the All Japan Road Race Championship in 2016, and for the first time in 3 years, it made a return to the four-wheel races in the SUPER GT and took on the competition in the FIA-F4 for the first time.

Devices that come standard with Android™ 4.0 or later (excluding some devices) *Collaboration details may be changed at any time without prior notification.